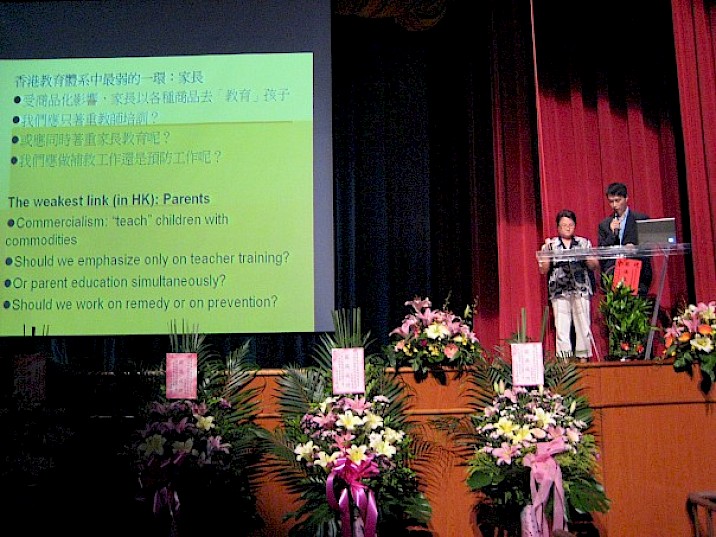 "The destiny of nations lies far more in the hands of women, the mothers, than in the possessors of power, or those of innovators who for the most part do not understand themselves. We must cultivate women, who are the educators of the human race; else the new generation cannot accomplish its task." ─Friedrich Froebel,

Parents are seen as the weakest link in Hong Kong educational system of today.  With the influence of commercialism, Hong Kong parents are using many commodities to duck feed their children, such as TV/computer programs and Glenn Doman’s flash cards. Most mothers had no problems with raising several kids in the past.  However, today’s parents experience great difficulty with raising even one child, despite their high education and capability.  In the past, three-years-old children could be taught when they started schooling.  However, it is now very difficult even to teach some of the 18-month-old children.  Why is that?  Should we emphasize only on teacher training, or parent education simultaneously?  And should we work on remedies, which require twice the effort than needed, or on prevention?

In Hong Kong, parent education usually refers to the few but sparsely organized seminars held by government or voluntary groups with topics mainly touched on “health education”.  Parent meetings or workshops held at nurseries and kindergartens are short and brief.

In western countries, parent education development has an earlier start.  Government and voluntary groups take it more seriously and provide a lot of workshops for free, or at a favourable charge, to encourage parents’ attendance, despite the lack of systematic organization.  We are not comparing the development of parent education in the east and the west.  What we concern is that adults do not seem to value or even overlook the importance of parent education, with the result of their misunderstanding and prejudice towards children.

If we are to re-organize the entire education system, parent education must be listed as a compulsory or selective subject.  Continuous programs for parents for further study and practice must also be provided.  To accommodate parent education into today’s society, it has to be well organized and integrated with nurturing and educating.  More importantly, parents are to be guided continuously by instructors, whether they are raising their own children or others?  Are the children with problems nowadays produced by nature or nurture?  Shall we work on prevention or remedy?

For education to be carried out with a balanced and solid foundation, resources should be rationed in a pyramid structure with tertiary or higher education at the top, secondary education below it, primary at a second lower level, and early childhood education at the bottom.  The lower the level, the more resources it needs for the benefit of every child.  Younger children require more resources because they need to learn in a more practical way and with individual approach in a group, so as to help them with the achievement of self-learning.  However, parent education which is the most important and basic receives only little or even none of the resources being distributed.

Unfortunately, our educational resources given out today are in an upside down pyramid structure, which collapses easily due to an unbalanced foundation.  Is this the blind spot of the government and the education industry?  Or is it a mismatch, disability, failure, or wrong spot?  We must reflect seriously upon the fundamental education, especially in Asia.

Development from birth to 3 years old is the most important of human being.  There is an old Chinese saying that the characters of an eighty-year-old would have been shaped before age 3.  The first three years of life lies in the hands of the mother, family and the social community but not only the nursery educators.  Needless to say, therefore, it is important and urgent to proclaim parent education for mothers, families and the community.

In her book “Formation of Man”, Dr. Maria Montessori talked about adult transformation, that the current biggest problem to liberate children and indicate their abilities, is not one that searching for a successful educational method but to overcome adult’s prejudice against children.  Therefore, a kind of adult transformation must be unfolded simultaneously as it is the barrier of adults that we need to overcome.

The kind of “adult transformation” of this century must be seen to include “parent education”,.  the importance of which should be equivalent to educating children and teachers.  We have to help the parents and adults to be transformed, “HELP ME TO BE TRANSFORMED BY MYSELF”. In this way, children can be saved for the purpose of attaining education for world peace.

It is the hands that rock the cradle rock the world.  What a mother has experienced and gone through becomes the lively teaching materials for children.  The external behaviours of a mother in her daily interactions with her child reflect the hidden psycho, which requires to be corrected with guidance if it is deviated in a wrong direction.  This is because what the mother has done may enter the subconscious of the child which will affect his behaviour and thinking in the future.  Mothers place all the love, hope and commitments on their children, whereas the will of survival of parents comes from hope, children and love.

The spiritual power of women seems to be stronger when they become a mother (some men do too when they become a father).  Over three thousand people have attended our parent education class in Hong Kong.  Many of them said that they felt different in terms of their abilities of sensing, observing and expressing, which have grown stronger after giving birth to child.  They become more sensitive to everything about their children and more curious about life.  We call this the sensitive period of “getting interested in new life”.  If parents have the opportunity to come to know the philosophy of Montessori education during this period, it will be easier and quicker for them to master all that about the child.  There are many parents who have learnt of Montessori philosophy and become teachers only after their children were born.  My partner and I are some examples.  Our motivation comes from children.

In an environment that is well-prepared during the sensitive period of “getting interested in new life”, which means parents are given the chance to learn and be guided by instructors, things will work out with half the effort of the one that is not.  Moreover, the spiritual power of the child comes from mother, the first-hand (chief) guidance of one’s life.  We often say that teachers resemble mothers, and not the other way round.  Mother’s love is one that sees giving as rewarding.  And it is because of this that it shines!  The very first adult and target of imitation of a child is an educational worker --- his mother, who is free of political and system restrains, and can implement education with most freedom.  The capability of one who teaches in a micro or macro environment that has no restrains could be infinite.  Potentiality as such cannot be ignored.  Leaders who could recognize the power (potentiality) of mother education would be able to produce numerous outstanding human beings.  Every child is a treasure.  We don’t need to advocate distinctive but risky method of education anymore.  We will be spreading the seed of world peace merely by imparting Montessori education to every mother.

Is it not the cosmic task of parents to educate children?  If Montessori education emphasizes only on teacher training, with expectation only of teachers and not of

parents; or only on school education and not family, things can only be achieved with twice the effort of that is not.  We wish that every Montessori teacher not only becomes the directress of children, but also of mothers; to inspire not only children but also parents.

The deviated behaviours of those who lack parent education would spoil children with overly love, would turn respect into indulgence, or freedom into undisciplined.  So, we must even educate parents before the child is born.  I would call it “minus one education”.  We have to take advantage of mother’s “sensitive period of new life”, instead of waiting till children turning three to be “re-educated” by teachers.  It is because building is easier than re-structuring, and re-compositing is more difficult than re-structuring.  Don’t waste the valuable time of man and society.  We have to make good use of the valuable resources of education.  Nature has arranged for us an important educator --- mother!  It is, therefore, sarcastic if we continue to neglect the role of mother in education!  All educational problems are not originated from children, but adults.

In Montessori’s book “Family and Child”, it refers that the adult who is closest to the child, whether mother or teacher, would contrarily be the probable person who may do harm to his character development while the process of such is taking place.

It is necessary for us to purify the former method of educating children, build it up with clarity and write it out clearly; clarify through parents’ school; and let parents practice thoroughly through the children-parents class.  In other words, learning, thinking and doing should go together side by side, a concept which is unanimous with the teaching and demonstration of Montessori education school system and the one year practicum of apprenticeship system.

We have been promoting parent education for three years in Hong Kong.  During this period, over three thousand parents have attended some 8 to 60-hour courses.  They formed a class of people who have grasped the basic concept about Montessori.  At the same time, they have completed at least twelve hours of observation in children-parents classes, some have even been doing this for several years, either through us or other centers.  They have now formed a small community and called themselves “Montessori Mom”.  They exchange ideas in their daily life or through internet, of how to put Montessori concept to practice.  This has not only given quality pedagogy the chance to be passed on, but also created a “Montessori Mom Boom” in Hong Kong within a period of two to three years.

According to the questionnaire statistics collected from these parents, almost all of them have indicated that the Montessori parent program has positively changed their attitudes towards children and the way they live.  In fact, adults have been transformed before they can positively influence their children, family, friends, society or even country.  One of our parents, who used to spank his child, has started to respect not only the child after taking the program, but his wife, family, colleagues and community members.  He has influenced them with his change and brought them over for the parent education program.

Montessori education must keep up with time.  While educating children and teachers, we should also educate parents, who impose profound influence on children.  At the same time, Montessori parent school should be seen as important as Montessori pre-school.  Let us give our capable parents the chance to further deepen the meaning of “education”.